When The Moon Shines | Tour & Giveaway 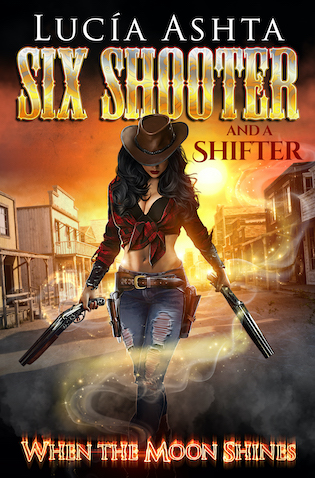 Welcome to Traitor’s Den. I hope you like it here, because there’s no leaving the small western town that’s more theme park than authentic. Once you walk through the portal, you’re stuck as a boot heel in a half foot of mud.

I’ve never seen the outside world and I don’t care. The cannon-toting, trigger-happy residents here are like family, even if most of them are a few spoons short of a full set. Eventually, everyone grows on you, kinda like nail fungus. But the booze flows freely, and Tiger keeps me company. He’s as much a prisoner as I am.

I don’t figure there’s much point in wanting what you can never have. I’ll eventually accept one of my boyfriend’s marriage proposals and then keep policing the one-way town while I pop out the babies he wants. I was born knowing how to make chicken salad out of chicken shit.

At least I won’t be bored. Denners aren’t fans of following the rules, and the longer they’re in town, the worse they behave, thanks to the spell that keeps us all trapped here.

Just when I think I’ve made my peace with my lot, the portal pops open and two men shoot through, throwing punches before their feet even finish landing in my town. When they finally look at me, all I see is problems. Big, ginormous, entirely-too-handsome problems. And that’s before I even take into account the little “surprise” they brought through with them.

No one’s ever looked at me the way they do.

They aren’t the kind of men who back down after claiming something.

Did I say I had my life in Traitor’s Den all figured out? Hell, I couldn’t have been more wrong.

* A sexy fantasy western with growly shifters, sketchy vamps, peculiar mages and creatures, and one badass cowgirl sheriff. Within this small town, magic and gossip flow as freely as whiskey, and work and pleasure are nearly the same thing. Weird things happen on the regular in Traitor’s Den. Come and join the quirky family, where everyone’s packing. Oh, and don’t mind the tiger. 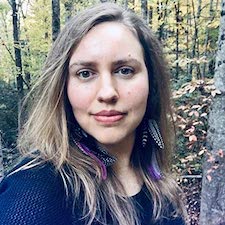 A former attorney and architect, she’s an Argentinian-American who lives in North Carolina’s Smoky Mountains with her husband and daughters.

I sank farther down into my chair, silently grateful for its support. With the way the dragon magic was burning through me, I wasn’t sure I could stand on my own anymore, and certainly not for long.

Sweat dripped along the sides of my face, between my breasts, and down the curve of my back. I’d stopped wasting the energy to sop it up hours ago. The day was hot as most were in the desert that barely changed seasons—thanks for that, Uncle Tucker—but the sun was kissing the horizon, and twilight was ushering in. With it, a drop in temperature would cool the parched earth. I knew this to be the case, but I couldn’t feel the relief.

I was burning up from the inside out.

My hand rested on Tiger. He’d barely left my side, chuffing so regularly that it sounded like an agitated purr. The shifter, usually far warmer than I was, felt cool in comparison to the heat running through the palm of my hand.

The burn was inescapable. Just as it seemed my fate might be…

“Ow,” I yelped at a sudden biting pain on my earlobe. A blur of translucent wings zoomed out of view.

With a groan of wood beneath me, I swiveled to pin the buzzing fairy in my sights. “I’m gonna jerk you bald, Bluebell. Why the hell’d ya pinch me? I swear to holy basil, if you don’t stop messin’ with me I’ll tear your arm off and beat you to death with the bloody stump!”

Bluebell smirked at me. “As if you have the strength for that… You’re as spright-lookin’ as a stretch of bad road.”

“I won’t deny that, but think of this. If I do end up dyin’, I’ll haunt you till the end of your days. Do you really wanna be messin’ with me now that I might be nearing death’s door?”

That got the fairy to purse her lips in a troubled scowl.

Score. I hadn’t even known if the bothersome magical creature believed in an afterlife.