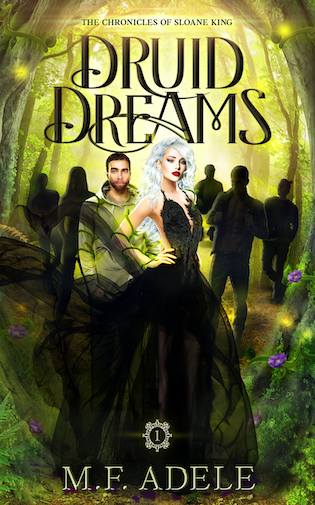 I am not a good person.

I don’t cheat or steal, but I do lie a little bit… and participate in the occasional murder… spree.

Life as I know it gets turned upside down when I’m asked to step in and halt the progress of a black market drug tainted with magic. That one little business adventure opens up a whole f*****g Pandora’s Box and brings my ebony tower crashing down around me.

As if life wasn’t complicated enough, I also now have mates. Emphasis on the ssss part. I want to be mad about it, really I do… but they’re so hot, and the temptation to make them all mine is fueling my desire.

With a final mate that I’m not happy about and a stalker on my heels… maybe having several someones at my back isn’t such a bad thing.

Don’t get me twisted though… I’m Sloane f*****g King, and I’m no damsel in distress. 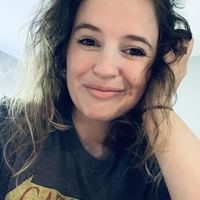 M.F. Adele resides in the outskirts of the Rocket City in Alabama. She lives in her overactive imagination, often fueled by caffeine and no sleep. When she isn’t writing, M.F. is outdoors with her family, obsessing over spicy margaritas and cigars, or reading books by her favorite authors.

If you’re looking for M.F. Adele, you can find her on social media in her group:

The last thing I grabbed was the bloody fucking phone with some poor old man’s prized possession lying on it.

The squeal that left my mouth was never to be talked about again. I was not proud of it. Godsdamnit.

I tried to pick the phone up from either side, but when I lifted it, that dead dick rolled right against the palm of my hand.

The dick touched me.

I was gonna be sick.

“What the fuck was that?” Vaughn whisper-shouted from the doorway as he packed everything into the three boxes he’d brought with him.

I hurled the phone into the box sitting on top of the two he had already filled and started untying my boots to slip out of the office.

“Dude, I touched the fucking dick.”

I stopped what I was doing to rub my hands on my pants. I could still feel it touching me.

Vaughn let out a surprised hoot and shook his head at me.

“That’s why you squealed? You’ve touched dicks before. I don’t see what the issue is with brushing up against that one.”

He looked me over like I was the biggest idiot he’d ever met.

He didn’t get it.

“Yeah, but those dicks were warm and attached to someone. That one is NOT attached to anyone,” I whisper-shouted right back at him.

“It’s cold and lifeless and severed at the end.”

Another full body shiver worked its way through me as I described why I was freaked out.

That motherfucker was still laughing at me. He was folded over at his waist with his hands on his knees, sucking in breaths as he tried to contain himself.

It was not fucking funny!

I gave him my back and began wiping down the door handles on both sides of the door.

“Cold and lifeless, huh?” he jeered. “I thought you were describing your own dick for a minute there.”

He handed me the open box full of computer equipment while he picked up the other two filled with paperwork, books, and random shit from the shelves.

“Get fucked, asshole. I’m scarred for life after that,” I muttered to him as we made our way back to the elevator, barefoot and carrying boxes full of stolen shit.

I wish I could say this was the first time I’d done this, but I don’t want to lie. It wasn’t.

I glared daggers at Vaughn as he silently continued to laugh at me. His shoulders lifted up and down and his reddened face was canted to the side.