Tour & Giveaway | The Lies That Shatter 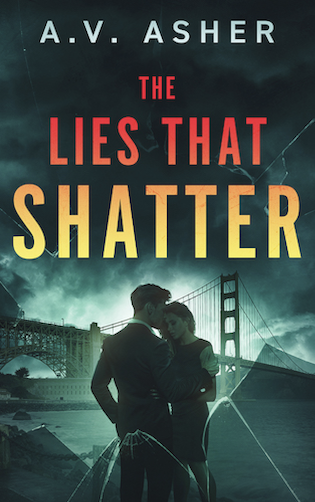 Devastated and lost, Former British Intelligence officer Alec McKinley knows he must move on. Still, he can’t forget the love of his life. The woman he tried so hard to protect and failed. When Alec arrives at the trial that will determine the fate of those responsible for destroying his world, he discovers how deep the lies run.

Mercedes Elliot has suffered through a lifetime’s worth of trauma, but finally, the end seems near. The trial that could free her from witness protection is around the corner, which means Alec will be waiting for her at last. She can’t wait to drop the charade she’s been living. But when Mercedes returns, she finds Alec isn’t alone and everything she thought she knew is a lie. There’s no one left to trust.

Deceptions run deep, and Alec grows more and more desperate to protect Mercedes, even as she is slipping through his fingers. Can he keep her alive long enough to prove he has never forgotten her? Or will evil succeed this time… 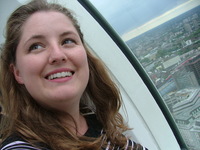 American writer AV Asher (Avie) was one of those kids always who got in trouble for reading in class. She has been creating stories since childhood, but only recently began writing them down. The Truth Keeps Silent is Avie’s debut novel. The second book in the duet, The Lies That Shatter, is expected to be released in the Autumn of 2021. Avie lives in Northern Nevada with her husband and three children.

Alec sipped his whisky, enjoying the unique vibe of The Whiskey and Cask. Jazz music swirled softly through the small barroom. Rough brick walls lined the back of the bar, and the ornate copper ceiling reflected the light from the chandeliers.

When Alec finally spotted Mercedes entering the room, his ability to breathe left him. She looked so fucking amazing. The simple black dress reminded him of the first time he’d ever seen her. The neckline plunged between her breasts, revealing just enough curve to draw the eye. One shoulder was exposed with a thin strap holding up the side. The other had a long sleeve that swept around when she moved. The red heels accentuated her supple legs.

Alec’s cock stiffened just thinking about running his hands up her soft thighs and plunging his tongue between them. Tasting her again while she arched her hips up to him. A magnetic pulse burned between them, and he couldn’t get enough of her. He tried his best not to openly stare, but she was drawing him in like gravity.

Mercedes looked up and held his gaze in her own. He didn’t miss how she looked beyond him, searching to see if he was alone.

When he made his way to her, she eyed him warily. The veneer faltered slightly before she offered him a smile. No warm hugs or kisses on the cheek for him. She held out her hand, and Alec automatically reached for her. Electricity pulsed between them, stealing his ability to see anything but her.

“Thanks for coming,” she said, her fingers warm in his.

“You look beautiful,” he said.

She blinked at him in surprise. “Thank you. You look pretty dashing yourself.”

“Thanks.” His gaze was trapped with hers until she looked away. Alec glanced to the corner where a few instrument cases were being stored. “Will I get to hear you play violin tonight?”

Her expression shifted to uncertain. “Maybe. They might drag it out of me. I’ll probably make a fool of myself. I haven’t played since . . . well, since Scotland.”

Scotland crashed into his mind. Mercedes’s responsive body arching toward him as he pleasured her. The moans she made echoing in his head.

Alec cleared his throat. “I was hoping I could talk to you tonight, just the two of us. What time is Noah taking you to your safe house?”

Mercedes’s brows shot up. “Oh. The case went to the jury this morning, so I don’t have a safe house anymore. And Noah’s already been reassigned. He left this afternoon to go back to Sacramento.”

Shock filtered through Alec’s brain. “What?” He scanned the room. “Who’s on your detail then?”

A laugh trickled from Mercedes. “I don’t have a detail. I moved to a little boutique hotel in Pacific Heights to be closer to Charlie.”

At his expression, she smiled at him. “That’s one reason to celebrate tonight. Don’t you think?”

Fear crawled up his chest. “I don’t understand. Why wouldn’t they tell me?”

Mercedes tilted her head. “Why would they tell you?”

It hit Alec like a brick. He wasn’t in the loop. They had ended her security, and he had played no role whatsoever in her safety. No part in her life at all.

Panic flared and he reached for his phone. “I have a few guys here that I trust. I’ll pull them and make sure they’re at your hotel.”

Mercedes’s fingers on his forearm stopped him. “Alec, please don’t.”

“You need someone to watch out for you.” He was finding it hard to breathe.

She shook her head. “No, I don’t. My testimony is over. The jury is deliberating. It’s time for me to return to my life.”

Mercedes’s brow creased with worry but she lifted her shoulder. “Jason’s always going to be a threat. I can’t hide away forever.”

“Alec, this is what my life is. Today, I truly get to start over. To be Sadie Elliott again.” She gave a rueful laugh. “Whoever she is.”

“I know who she is,” Alec said softly.