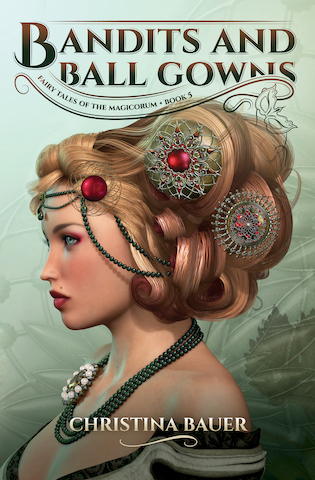 One Prince Finds True Love … And Risks It All

Elle Cynder has fallen hard for Alec, the ‘prince’ of Le Charme Jewelers. Time for some happily in their ever after, right?

While the new couple shares joyful moments–and sizzling kisses–serious trouble is brewing. Elle’s evil stepmother, Marchesa, schemes with none other than Alec’s twisted father, Legend. Their plan? Destroy Elle and Alec, along with everything the young lovers hold dear, including Bry, Knox, and Wilhelm.

Another Royal Freezes His Heart … But For How Long?

As a prince of the dark fae, Jacoby focuses on one goal: avoid assassination. Marrying Elle would certainly aid in that cause, considering how she’s both a Cinderella life template and a powerful fae warden. Even better, Jacoby doesn’t truly love Elle. In court life, deep romantic attachments only mean certain death.

For the first time in his life, Jacoby’s cold heart warms with true affection. The elven prince struggles to ignore his feelings, but it might be a losing battle. And what would the prince’s newfound emotions mean for Elle and Alec? Could Jacoby really stand by and watch another’s true love be destroyed?

Buckle up for a wild ride as Cinderella’s time-honored story gets some all-new twists.

Christina Bauer knows how to tell stories about kick-ass women. In her best selling Angelbound series, the heroine is a part-demon girl who loves to fight in Purgatory’s Arena and falls in love with a part-angel prince. This young adult best seller has driven more than 500,000 ebook downloads and 9,000 reviews on Goodreads and retailers. The first three books in the series are now available as audiobooks on Audible and iTunes.
Bauer has also told the story of the Women’s March on Washington by leading PR efforts for the Massachusetts Chapter. Her pre-event press release—the only one sent out on a major wire service—resulted in more than 19,000 global impressions and redistribution by over 350 different media entities including the Associated Press.

Christina graduated from Syracuse University’s Newhouse School with BA’s in English along with Television, Radio, and Film Production. She lives in Newton, MA with her husband, son, and semi-insane golden retriever, Ruby.

Stalk Christina On Social Media – She Loves It!

I loathe visiting my family’s castle in the Faerie Lands. The place is drafty and full of ghosts.

Not metaphorical ones, mind you, such as the types who slam doors or go boo in the night. I’m talking real spirits with opinions that they insist on sharing. Overall, I find it’s best to do my business here and return to Earth as quickly as possible.

To that end, I step in my newest throne room. This was my late brother Frey’s seat. As I cross the threshold, one thing becomes obvious.

The decor here is horrible.

Frey had an unhealthy interest in bull themes. Therefore, horns adorn the walls while a mosaic of charging bulls covers the floor. And the throne itself is coated in a rather putrid brown hide. I’m assuming that’s a bull skin, but with my family, you never know.

My animate servant, Doc Eight, stomps in behind me. He was originally a suit of armor, so his steps are always noisy. “What a grim day, your Highness.”

And it certainly was when my older brothers Abner, Barnaby, Cramley, Damascus and Edwin died.

I inspect a set of horns stuck onto a nearby wall. Frey really did have the worst taste. And it concerned more than bulls, too. Frey had a nasty habit of attempting to murder us brothers. Rude. The royal family has enough trouble with outsiders and assassinations.

“So not as grim this time?” asks Doc.

Doc shakes his head. Since he’s an enchanted suit of armor, the movement involves a lot of squeaking noises. “I can’t believe it,” he says in his deep and echoing voice. “You’re now fourth in line for the royal throne of dark elves.” My parents were killed off years ago. Now it’s a rotating line of brothers.

“Don’t remind me,” I state. “My family has a dismal record when it comes to life span. Now only Gorgan, Harold, and …” I snap my fingers, trying to remember the name.

“Right. Now only Gorgan, Harold, and Ignatius stand in line before me.” I step closer to the very pungent throne. “Ah, well. Best to get it over with.”

Now that Frey is dead, I must officially take over his seat. The process involves actually reclining on Frey’s throne while saying a spell. After that, I shall return to Earth before I’m poisoned, shredded, or otherwise destroyed.

I take my throne and pull on my inner power. The room darkens. An electric sense of magic crackles in the air. “I, Prince Jacoby of the Dark Elves, do hereby acknowledge my new place in the line of accession.”

“Is that all?” asks Doc. He knows there’s a long version of this particular speech. To begin with, I have about twelve separate names and titles that I could add into the mix. Frey’s not worth it, though.

“We’re doing the short version today,” I reply. “And thus endeth the spell.” The room lightens. All sense of power fades from the air.

Time to return to Earth.

Speaking of the human realm, I still need to find a powerful wife to help keep me alive. Elle remains my top choice. She’s a warden, nice to look at, and not yet wed to that Alec fellow. And, most importantly, I really don’t care if she lives or dies.

That’s the ticket to staying alive in the Faerie Lands: pleasant detachment.

Emotional entanglements are only a horrid waste of good energy. Other elves see your affection as weakness. And they’re right. In short order, those feelings will be used to murder you in any number of ways.

Mother always said that she’d rather drink poison than fall in love. Both cause your death, yet only poison allows you to set the time and place.

A wise woman, my mother.

Knocks sound at the chamber door. I hadn’t realized Doc had closed us in. It’s a wise choice, though. No point being seen by relatives. Or anyone, really.

“Shall I check the door, my Prince?”

Every reception chamber has a hidden peep hole for the outer hall. Doc marches right over to the one for this space. He really is extraordinarily efficient. I couldn’t ask for more in a servant. Doc even pretends to be my boss when we are hiding out on earth. That isn’t easy, once you know who I really am.

Doc removes an obliging bull horn from the wall. A small hole sits in the plaster. Doc looks through. “You have a group outside who wishes to speak with you.”

Stepping down from my throne, I use the peep hole myself. A rather ragtag group waits in the outer hall. It’s Marchesa, Agatha, Ivy, Diamond and Legend. I’d heard they’d been pardoned from Queen of Hearts dungeon. So long as they are in the Faerie Lands, they may remain free.

I roll my eyes. Elle and Alec are really too soft-hearted, pardoning them all like that. Ah, well. If Elle becomes my bride, I’ll have to educate her on the uses of sympathy. As in, there are none.

I reset the bull horn into its spot in the wall.

Doc tilts his metal helm. It’s his silent way of asking. Do you wish to see them?

I’m about to say, never, but then I sense it.

A pulse of power.

← Into The Void Blitz Raycon Trendsetters - My Audible Companions →