Blitz and Giveaway – In The Shadow of a Valiant Moon 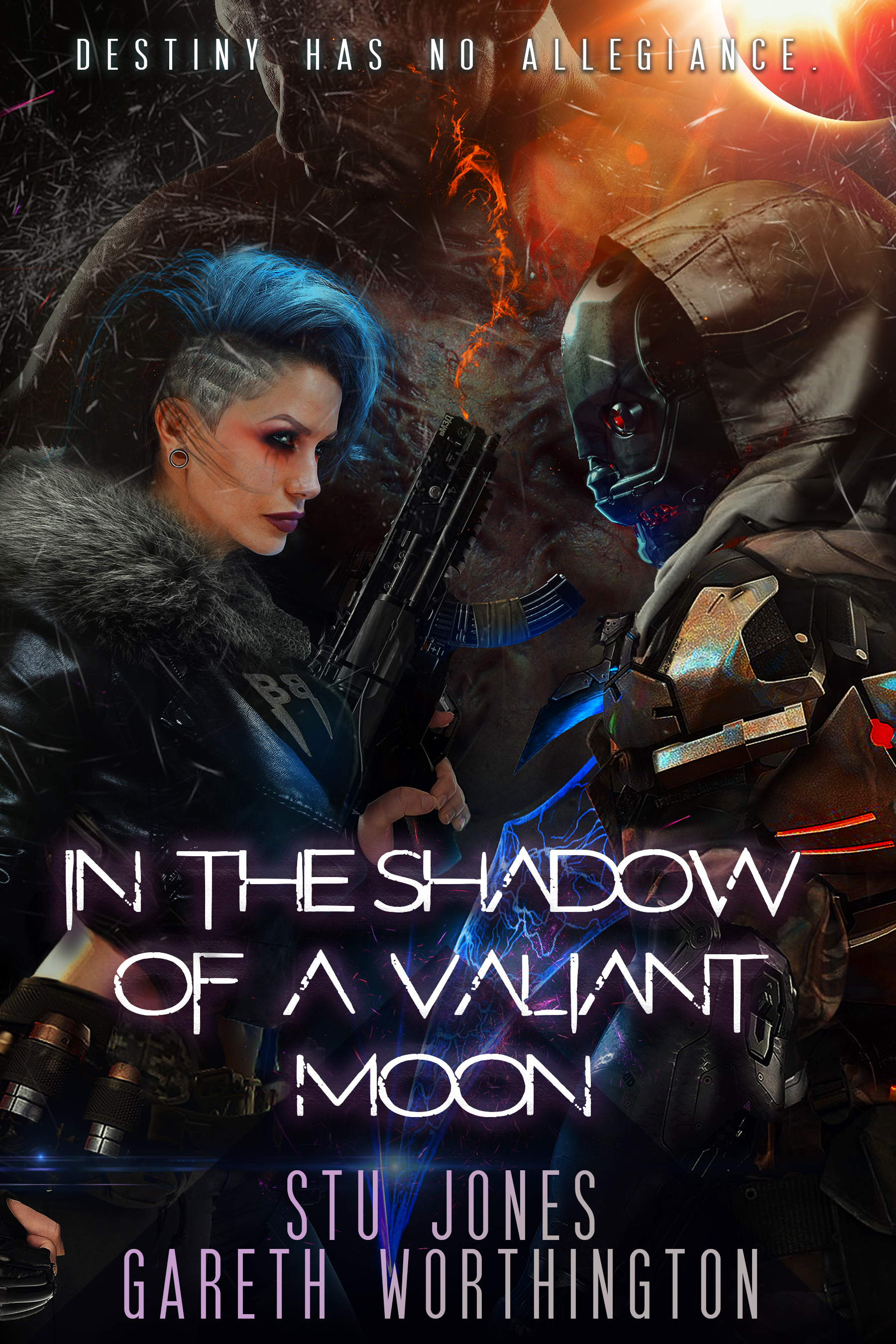 Four years have passed since the lillipads fell and Etyom slipped into
darkness. The New Black Death has mutated again, spreading to near epidemic
proportions. What little order existed in Earth’s last city has
disintegrated into chaos.

Rippers roam the Vapid, robbing and leaving their victims butchered. The
Robusts have spilled out of their broken enclaves and hide in any dark
corner that will conceal them. Meanwhile, the elite Graciles, fallen from
their pristine towers in the sky, have all mysteriously disappeared.

Demitri is a prisoner in his own mind. His demon, Vedmak—now known as
the Vardøger—is manipulating Demitri’s body to execute a
secret plan far more disastrous than even the Gracile Leader dared.

Mila, her status among the fractured resistance elevated to that of
Paladyn—a protector of the people—leads the fight against
zealots intent on destroying what little remains of Etyom. It is a
responsibility she never wanted, a calling that prevents her from doing what
she truly desires.

Yet, Mila should be careful of what she longs. Caught between annihilation
and loyalties that refuse to die, she must reconcile a single immutable
truth: following your heart comes at a price.

Previous Book in the Series

The world you know is dead. We did this to ourselves.

The epidemic struck at the end of the Third World War. Fighting over oil,
power, and religion, governments ignored the rise of an
antibacterial-resistant plague. In just five years, the Earth was
annihilated. Only one city survived—Etyom—a frozen hellhole in
northern Siberia, engulfed in endless conflict.

Two groups emerged from the ashes of the old world. Within the walled city
of Lower Etyom dwell the Robusts—descendants of the poor who were
immune to the New Black Death. Above them, in a metropolis of pristine
platforms called lillipads, live the Graciles—the progeny of the
superrich, bio-engineered to resist the plague.

Mila Solokoff is a Robust who trades information in a world where knowing
too much can get you killed. Caught in a deal gone bad, she’s forced to take
a high-risk job for a clandestine organization hell-bent on
revolution.

Demitri Stasevich is a Gracile with a dark secret—a sickness that, if
discovered, will get him Ax’d. His only relief is an illegal narcotic
produced by the Robusts, and his only means of obtaining it is a journey to
the arctic hell far below New Etyom.

Thrust together in the midst of a sinister plot that threatens all life
above and below the cloud line, Mila and Demitri must master their demons
and make a choice—one that will either salvage what’s left of the
human race or doom it to extinction …

The young man in the brown jacket spins, arms raised high, a blood-curdling
scream issuing from his lips. A few awkward steps and he falls, sprawling
headlong across a pile of slush and rubble. A crimson fan spreads out under
his corpse, staining the snow red. Another death, another friend of the
cause, gone.

All around the pop-whizz of gunfire followed by deafening explosions from
detonating grenades reminds us all the Kahangan stronghold of Nazal will not
fall easily. I slide farther into the frozen mud of the ditch and scrunch
into a ball.

“I’m here, Mila.” The barrel chested Kahangan with midnight
skin crawls up next to me, careful to keep his bulk below the rise.

“Sniper?” Mos jerks his head in the direction of the building
before us. Politsiya in faded Cyrillic letters adorns the ruined
facade.

“Knows what they’re doing too.” I pull a small mirror from the
arm pouch on my leather jacket and slowly raise it to get a better
view.

In the reflection is the form of a person, prone on the roof of the
palace—if you can call it that.

A glint of light bounces off the glass.

I snatch my hand down and pinch my eyes shut as a chunk of earth explodes
from the rim of the ditch, showering us with wet clods of cold mud. The
lingering crack of a rifle follows. He’s got a sarding scope and a
good, stable position. Guy definitely knows what he’s doing.

“There’s a way up to the roof on the back side,” Mos says.
“I can flank his position and approach from behind if you can keep his
attention.” He cocks his head. “That’s probably stupid,
huh?”

“It’s only stupid if it doesn’t work.”

Mos, already shuffling away, motions to a few others hiding in another
ditch to follow.

“Wait for my call.” Mos grins, revealing large, square, white
teeth, then creeps away and seems to vanish into thin air.

The cold seeps through my clothing, stealing the fading warmth of the sun.
My scarred Kalashnikov rifle feels like a cold, lead weight. I exchanged my
bean-bag propelling weapon for a death-dealing one some time ago. I
don’t even remember when that happened. Like everything else in this
forsaken city, it just sort of did. Yeos forgive me. I loose my canteen from
my satchel and take a shaky swallow of the nearly frozen water.

I drop the canteen, roll to the left, and rise to one knee. Three more of
my fighters appear and the air ignites with the sounds of war. Dust and
stone billow around the sniper’s nest. Our suppressive fire has the desired
effect: he’s blinded by debris.

“Ceasefire!” I kneel again, the Kalashnikov pressed into my
shoulder, watching as the dust clears. “Stand ready.”

We wait in silence, a bitter wind snapping at our scarf-covered
faces.

Another flash of light from the roof.

This time there is no report. No exploding clump of earth. A cry of terror
fills the air, followed by the sounds of a struggle. I chance a glance. Mos
is standing tall and proud on the roof.

My comrades lower their weapons. Mos reaches down and plucks up a skinny
Kahangan who drops a long-barreled rifle. The little man screams, flailing
madly against my friend’s superior strength.

“Traitor.” Mos bellows loud enough to be heard, even from down
here. With a single heave, the large Kahangan hurls the sniper over the
edge. The man’s hollow scream is cut short as he strikes the frozen ground
some ten stories below.

I force myself to peer down at his mangled corpse, twisted like a broken
doll in the ice and mud below. The Kalashnikov drops to hang from its canvas
strap across my chest. My people follow suit, relaxing their guard, their
eyes glazed over in a mixture of relief and stress. They’re all good
soldiers. Committed to the cause—peace in Etyom, the last city. The
Kahangan civil war has been going on for too long. Kapka—who somehow
managed to survive the RPG blast on the platform four years
ago—continues his campaign against the followers of Yeos with renewed
vigor, but has so far not managed to take this Musul faction. Instead, in
this desolate place, power-hungry warlords fight over resources while the
people suffer. Here, it’s not Kapka who reigns, but Nazal.

Little is known of the origins of this despot. Some say, like all warlords,
he simply rode to power on the broken backs of the Kahangan people. That
there was nothing he wasn’t willing to do and no one he wasn’t
willing to betray to claim the power he felt was owed to him. Others seem to
whisper of his evil deeds like he’s some sort of phantom—a
terrible consequence of our own divisiveness. Whatever the case, Nazal is a
plague. He’s no Kapka, but the piles of corpses he’s left in his
wake can no longer be overlooked. The resistance will stop him because
someone must.

A veteran law enforcement officer, Stu Jones has worked as a beat cop, an
investigator, an instructor of firearms and police defensive tactics and as
a member and team leader of a multi-jurisdictional SWAT team.

Gareth Worthington BSc PhD EMBA is a trained marine biologist and holds a
doctorate in comparative endocrinology. Gareth works in the pharmaceutical
industry helping to educate the world’s doctors on new cancer
therapies.

IT TAKES DEATH TO REACH A STAR: TRAILER #1

IT TAKES DEATH TO REACH A STAR: TRAILER #2

IN THE SHADOW OF A VALIANT MOON: TRAILER #1

IN THE SHADOW OF A VALIANT MOON: TRAILER #2