Mara didn’t know her parents were living a lie.

After learning a secret that causes Mara to question her heritage, she runs to Torindan, the High Hold of Faeraven, to seek the truth. What the innkeeper’s daughter doesn’t know is that Rand, the mysterious tracker she’s hired to guide her through the wilderness, has been sent on an errand that puts her life at risk.

Helping Mara furthers Rand’s purposes, but he doesn’t count on his emotions interfering.

With Faeraven on the brink of war, Rand is faced with a life-altering choice, Mara is torn between escape and learning the truth, and the future hangs in the balance.

Will Mara be heir to the Faeraven throne? Can Rand escape the terrors of the dungeon?

As Torindan and Pilaer prepare for battle, anything can happen.

Janalyn Voigt is a writer and professional speaker with a photography habit and a passion for travel. Her unique blend of adventure, romance, suspense, and fantasy creates worlds of beauty and danger for readers. Tales of Faeraven, her epic fantasy series beginning with DawnSinger, carries readers into a land only imagined in dreams. She is represented by Sarah Joy Freese of Wordserve Literary. 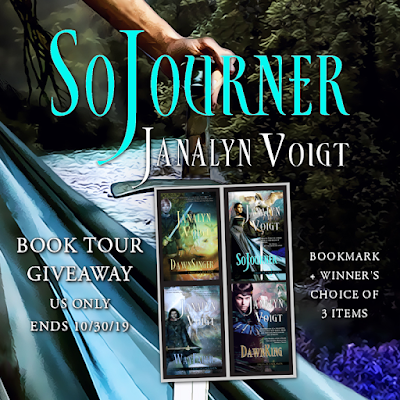 One winner will receive a Tales of Faeraven bookmark and choice of ONE of the following items (US only):

(Mara, the heroine of Sojourner, learns that she has a marriage proposal. Mam is her mother. Ardel is the kitchen maid.)

Da went out to the last guests lingering in the common room, and Mam beamed at Mara. “Rohan has asked for you.”

“He wants not a wife but a servant to tend his house and bear his wretched bairns.”

Mam frowned. “Don’t speak amiss of a man willing to take you without a dowry.”

“I’ll just finish in the morn.” Ardel, her face flaming, sidled past them and out through the swinging doors.

Mara used the small interruption to gather her thoughts. “He wants the inn and lands. He said as much.”

Mam’s nostril’s flared. “And what of that? If the man takes care of you and yours, he’d deserve them.”

Mam’s face softened. “Nay, child, never that. But can you not see that to wed our neighbor would keep you near?”

“Not marrying at all would leave me closer.”

“Why?” Mara said in desperation. “Why can’t I stay here with you and Da?”

“Hush, child. T’is the way of things, and naught to be done about it. Fledglings fly the nest.”