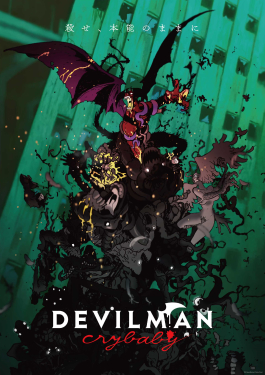 In the series, Akira Fudo is informed by his best friend, Ryo Asuka, that an ancient race of demons has returned to take back the world from humans. Believing that the only way to defeat the demons is to incorporate their powers, Ryo suggests to Akira that he unite with a demon. Succeeding in doing so, Akira transforms into Devilman, possessing the powers of a demon but retaining the soul of a human.

The series is more of a direct anime adaptation of its source material than previous works, covering the entire span of the manga. However, many alterations were made to the plot, such as a modern setting, the addition of original characters, and different characterizations.

This was a recommendation, and it was an interesting one, the artstyle really did accompany the plot and the music was fantastic, that was something I really liked on this anime.

Now the plot was pretty interesting and the ending was pretty unexpected but it did left me thinking in a lot of things, now the characters were very complex and in some manner this shade a light at how humans can be the more horribles creatures on earth and at the same time the more generous at some point.

A cool one to watch.