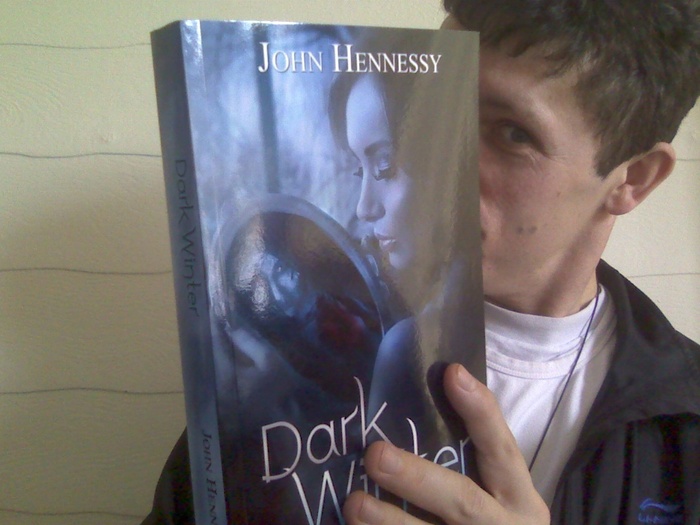 Born in the Year of the Ox, John Hennessy writes paranormal horror for both adults and teens. Originally from Birmingham, England, and of Irish descent, he has lived in New York before eventually moving back to his home city.

A kung fu addict; he teaches martial arts full-time but writes at all other times, working on three series:- Dark Winter, Stormling and A Tale of Vampires.

When he doesn’t have a book in his hands, he likes to travel and see weird and wacky things. He admits to having an unhealthy addiction to Star Trek, Batman, Charmed and Buffy the Vampire Slayer, to name but a few. He will also travel to reputed scary places in England, as he feels it makes his books more real.

Friend invites will happily be accepted, but you’ll need to interact. Unlike some of the characters in these stories, the author won’t bite

Tell us a little about yourself and your background?
My main profession is that of a martial arts teacher. I teach students in Kung Fu, Karate, Jeet Kune Do and Tai Chi. I have enjoyed reading books since I was a young child at school. I was active at my local library, sad to say it has been torn down now and rebuilt elsewhere. It’s not the interesting building it was before. But it did get me into reading, and I haven’t stopped as I’ve gotten older.
Which writers inspire you?
Stephen King is a great influence, though I never try to write like him. That’s for him, and for him only. Anne Rice is wonderful – she writes vampires and witches in ways I can only dream of. Again, her prose is dimensions ahead of mine, though you can bet I work on it.
My all time favourite author has to be JRR Tolkien. His vision, which created works like The Hobbit, and The Lord of the Rings, amazed me as a child. I’m lucky I live close to where he grew up in Birmingham.
Of course  I love other authors too, and modern ones like Suzanne Collins and Kendare Blake I think write great books too.
Have you written any other novels in collaboration with other writers?
Not to date, but I would not rule that out. Then again, from a creative standpoint I would probably like to stay in control. But I applaud authors who can work together. In fact two of my author friends did that, and the resulting novel was brilliant!
When did you decide to become a writer?
In this phase of my life, I decided back in 2009, when the recession all but cost me my job, which at the time was a role I had held for ten years. Perhaps the Gods were telling me to just move on.
That year, I began writing the non-fiction martial arts book that I always wanted to write.  After I finished that, I started work on my Tolkien homage which became Stormling. Book two will be finished in 2016. It’s the most fun I have had in years. I would recommend writing to everybody!
Do you write full-time or part-time?
I suppose it is part-time, as I have to fit in writing around my teaching and other personal commitments. I hope one day it can be my full time profession, as I cannot go on teaching at this level forever.
Do you work to an outline or plot or do you prefer just see where an idea takes you?
The answer is probably yes to each of those, though I aim to have a defined outline with a strong plot already decided. If I write as I go without doing this, it doesn’t really work for me. I have to have an idea of what I am doing, then you can bet the reader will see the story as I do! A writer must have a strong hold on the narrative, otherwise he or she will lose the reader.
Do you have a strategy for finding reviewers?
I think it’s about networking with the kind of readers and bloggers that will actively support you. Paying for blog tours doesn’t work in my view, thought it might be useful for some authors.
I would like to nurture a relationship with the reader / blogger / writer, so that they will shout for me, as I will for them, because we are actually interested in the material being created.
What are your thoughts on good/bad reviews?
Good reviews are great, of course.  I don’t believe anyone goes out of their way to leave me a good review. If they like it, they really do seem to like what I have written. Bad reviews are part and parcel of the writer’s life, and there is no way to avoid it. I take note of what they say, so long as it’s not spiteful or deliberately cutting. Also, some readers just don’t like what certain authors write. That can’t be helped. We just have to move on!
How can readers discover more about you and you work?
I have a blog, and I am active on Twitter, Facebook and GoodReads, to name a few.
Any Comments for the Blog readers?
Your input is so important to writers. We need objective feedback on what we do wrong, as well as what we do right. I hope you will support established and indie authors alike.
Any feedback for me or the blog?
I am delighted to have got to know you and I can see the amazing work you do for the book community. Thank you for having me.